Alright so I've spent the larger portion of my summer experimenting with alcohol and ice cream. Let me tell you, the results have been out of this world!

I first learned about alcoholic ice cream as I was scrolling through Facebook a few years ago. You know the year when crazy, quirky food trends started popping up all over social media? Yeah, that year. I saw something about an alcoholic ice cream bar located in one of the trendy cities here in Canada (the name escapes me, sorry).
Nonetheless, the idea alone was genius and it just so happened to stick with me in the back of my brain for all this time.

Now, fast forward a few years. While on Pinterest one day; looking at cocktails, I came across the Horchata cocktail.

Horchata is a drink that originated in Mexico. It combines the flavours of rice and cinnamon in a milk base. It is a really creamy drink that is usually sweetened with white sugar. I've personally seen people make this drink by infusing the milk with the rice and cinnamon flavour and then straining out the grains of rice. Yet, I have seen others proceed to blend up the softened grains of rice in a blender until it becomes smooth and drinkable. Either way, I knew this needed to become an alcoholic ice cream!


As I said before, alcohol does make everything feel softer! In this case, adding in some tequila to the cream mixture right before pouring it into our ice cream maker results in an intensely smooth and soft texture. Don't worry, the end result isn't too runny, but it's certainly as soft as the soft serve you'd find at your local ice cream parlour.

In this recipe we are going to be using the "infusion method" to flavour our milk with the rice and cinnamon flavour. The infusion process will take roughly 24 hours to yield the best results. Once 24 hours has elapsed, we can then strain the rice out of our milk base and move on with making our spiked soft serve ice cream.

What will I need for this recipe?

What kind of alcohol can I use?

I would highly recommend using Tequila in this recipe. The flavour of Tequila gives a nice earthy yet sweet agave flavour to the ice cream. I have personally never tried this recipe with anything other than tequila; however, you are welcome to try a different liqueur. Though, I would personally stay away from Whisky/ Scotch, as I'd imagine it would give an unpleasantly smoky undertone to the ice cream.

Now that you have your liquor picked out and your base infused with tonnes of flavour, it's time to throw it all together and turn it into some delicious ice cream.

Over medium heat you want to combine your infused milk with the ground cinnamon, sugar and vanilla. We want to heat this enough to melt the sugar into the milk. Do not boil or overcook this mixture! You then want to add in your egg yolks. At this stage we are looking to slightly cook the egg yolks so you do not have raw egg in your ice cream.

Once all of the ingredients are combined transfer to a glass bowl and let stand in the refrigerator for 3 hours. Once the mixture has cooled completely and is chilled, we can add in our cream and tequila.

Though, this recipe has quite a few steps and a lot of waiting, it is absolutely worth it! It is really important that you DO NOT skip the infusion time or the chilling time. If you skip on the infusion time, you will have little to no flavour to your ice cream. Furthermore, if you skip the chilling time your ice cream will not set and will likely be extremely runny!

Voila! You have some soft and flavourful Horchata Ice Cream...with a little extra oomph, of course! Eat it in a bowl or try it out in a fun rimmed glass with a little extra milk mixed in for a delicious new spin on a blended holiday cocktail!

Note: I rimmed the glass with ground cinnamon and brown sugar in the picture above. 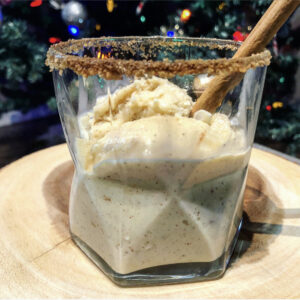 Tequila! A traditional favourite all the way from Mexico. This ice cream is extremely creamy, smooth, and soft with the perfect hint of spice. Add in a little alcohol and we've got a christmas favourite. This ice cream is so soft and smooth you could literally serve it as a christmas cocktail.
5 from 1 vote
Print Recipe Pin Recipe
Prep Time 20 mins
Cook Time 10 mins
Course Cocktails, Dessert, Ice Cream
Servings 6 Servings

This ice cream is really soft, do not over-churn! It may become soupy if you churn it for too long!
Chicken Parmesan »

Hi, I'm Corleigh! A fellow stressed af mom who lives for happy hour and taco Tuesdays! I am here to help you get delicious food on the table in the easiest way possible.