This Raspberry Almond Swirl Nice Cream features a swirl of a thick raspberry and almond blended smoothie and a vanilla blended smoothie. Even though the base of this recipe is overripe frozen bananas and frozen raspberries; the result is super creamy, healthy, and indulgent. So let's put those overripe bananas on your counter to good use and get swirling.

I have been in the market for a good vegan ice cream for a while, but kept falling short. The store bought versions were first and foremost, super expensive. Eight freaking dollars for a pint of ice cream? No thank you. But, secondly, the store bought versions were also very unhealthy and full of random ingredients. So, off to the kitchen I went to make my own healthy version of vegan ice cream. As I was creating this recipe I made sure to make the end product taste as little like banana as possible. Because, let's be real, we aren't looking for yet another banana smoothie recipe. I also didn't want this to taste like coconut either, so coconut milk was out of the question. Ideally, the perfect vegan ice cream would be made using a nut/oat milk base. But, that is still in the making! So, this frozen fruit base will have to do for now.

Don't worry though, this recipe tastes more like raspberry and almond than it does banana. Though, if you need a little more convincing on this delicious vegan ice cream, here are a few more reasons this nice cream is the bomb dot com (I know, we should have left that saying in the 90s):

Before scooping leave out on the counter for a few minutes. This will make the nice cream much easier to scoop.

Do I have to use almond extract? If you want the almond taste, yes. Simply adding almonds to the nice cream isn't enough to add a noticeable flavour. The extract also serves as an agent that stops the nice cream from crystallizing in the freezer. Thus, making it much more soft and creamy.

Use very overripe bananas. The more black and spotty, the better!

Can I use something other than bananas? You could try freezing your favourite dairy free milk in an ice cube tray and then blend that in place of the frozen bananas. But, I can't guarantee it will turn out as good!

Check out some other plant based recipes: 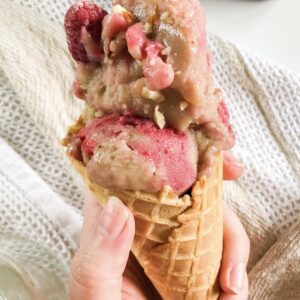 This Raspberry Almond Swirl Nice Cream features a delicious combo of a thick raspberry and almond blended smoothie and a vanilla blended smoothie. Even though the base of this recipe is overripe frozen bananas and frozen raspberries; the result is super creamy, healthy, and indulgent. So let's put those overripe bananas on your counter to good use and get swirling.
Print Recipe Pin Recipe
Prep Time 10 mins
Freezing time 1 hr
Total Time 1 hr 10 mins
Course Dessert
Cuisine American
Servings 2 Servings

Hi, I'm Corleigh! A fellow stressed af mom who lives for happy hour and taco Tuesdays! I am here to help you get delicious food on the table in the easiest way possible.